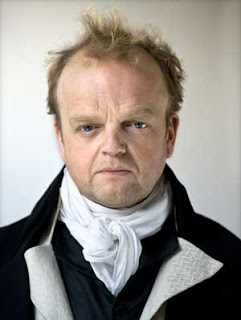 First of all congratulations to the Arcola for their new home on Ashwin Street after ten years on Arcola Street. The new location is easier to access for those of us coming from other, far boroughs, and the building itself is charming, with a derelict and amateur-ish feeling that's easy to fall in love with. Pity about the technical/enviromental difficulties experienced during the play - as in the noise from the street coming in so loud that sometimes it was hard to hear the actors and it was distracting throughout all the play.

And what a pity, because The Painter is a play that creates a very powerful, intimate mood.

TURNER: They'd never have me in their stable anyway. Constable, maybe. Not me. A rough at the court? No. (reading from a review) `Mr Turner, alas, feels the perpetual need to be extraordinary.´ Why would you want to be anything else?

It is rewarding in itself to see a playwright at the top of her game and that's where Rebecca Lenkiewicz is at the moment. Even though The Painter is far from perfect Lenkiewicz writes with such a confidence that it's just a pleasure to watch. Plus she inquires on the biographical/period piece from a modern perspective, writing historical figures as if they were contemporany plays' characters, which is of course the way to write them. This might of course be a particular bias of mine as I am personally very drawn to plays that examine historical events and settings.

The play concerns itself with romantic painter JMW Turner (played by a powerful and understated Toby Jones) and his relationships mainly with two women: Sarah (Niahm Cusak), neighbour and attracted to Turner as much as he is to her, and the prostitute Jenny (a surprising, gorgeous and incandescent Denise Gough), and with the shadow of the relationship with his mother (afflicted with mental illness) cast over the whole play. We meet Turner in 1799 as he is made member of the Royal Academy and begins to lecture students, while disdaining the "fashionables" - painters concerned with "face-painting", dogs, or flowers.

Constraint is a word that came to me watching the play: in a good way. The Painter is gorgeously sober for a piece of drama that deals with the life of an artist (but perhaps Turner, very private, invokes certain austerity himself). First of all the whole play is set within the studio of the painter - with brief glimpses into Turner's lectures at the Academy, done by light changes - beautifully designed by Ben Stones, minimalistic and monochrome. Then the performance by Jones himself works against the stereotype of the passionate artist; he also portrays Turner's arrogance with a matter-of-factly confidence that's hard to question - and I wish the play would have left more space for Tuner's arrogance and his principles of art. And that, for me, is the only weakness in Lenkiewicz's writing, the thing that stops this very good play from becoming a great play: there are too many themes touched upon but not sufficiently explored. The Painter crams a era of mental illnesses (the scenes with Turner's mother fell particularly flat for me), prostitution, slavery, the role of the artist in society, mother-son relationships, infant's death, patronage, snobberish... I felt the play touched on many subjects without them adding to a whole theme, though I liked the idea of it being somehow vignette-esque in its scenes but it lacked the kind of punch or edge that great plays have.

Nevertheless The Painter leave us with some very powerful theatrical moments: mostly in the scenes between Turner and Jenny, moments full of real human warmth and chemistry between the actors, scenes that made us forget the noise of Dalston outside and connect with the stage completely. Those scenes were remarkable pieces of theatre, if the play as a whole wasn't.

other reviews of The Painter:
There Ought To Be Clowns
musicOMH
The Independent
Posted by exiledbyaccident at 03:31 No comments: