Neither with you nor without you.

Of course there are an awful lot of "Oh Dear"s involved. And an awful lot of "Awful"s and "Positively"s and "Precisely"s and all sorts of adverbs that tell us that we are, unmistakenly, in a 1920s-1930s comedy of high society and misunderstandings. There's also quite a repeated use of the word "Cad" (to describe Matthew Macfadyen's character) which makes the audience cringe and feel nostalgic at the same time.

It's a thoroughly predictable affair, the way ex-husband and wife Elyot and Amanda meet each other after years while on their respective honeymoons with their respective, adequately dull and pathetic, new partners. One gets out the theatre with a terrible urge to pop in one's DVD copy of The Philadelphia Story. That's usually the case with Noel Coward, isn't it? - Not that I know, as this was my first Noel Coward production.

But underneath all that wit and charm and misunderstanding and inspired one-liners (my favourite American sitcom, Frasier, owes so much to Coward, after all) one appreciates the touch of darkness, the violence and, above all, the frank depiction of sex and sexual desire the play offers. Richard Eyre's production is incredibly charming and aptly superficial; there are many interesting things about these characters but they are never explored, except by chance and perhaps by the actors accidentally scratching beneath the surface. No matter how much I enjoyed the performance I was a bit underwhelmed by the shallowness of the whole business; and by the audience incapacity to follow theatre etiquette. I wondered: Have this people never been to a play before? There was clapping during the performance, and talking and general rudeness.

(As a side note, yes, I agree with the elderly woman in the first row with us: 49 pounds IS A SCAM for what can only be described as "restricted view" seats. We paid them because we have been waiting to see Matthew Macfadyen for ages, but it is a scandal. For some mysterious reason the Vaudeville's usual policy of having Day Tickets didn't apply to this play, possibly because of the limited run. So yes, we were utterly robbed.)

As for the acting, the ensemble worked very well. It was a strong cast and the performance had no cracks on its armour. Kim Catrall didn't jar but she wasn't impressive either - she had easily the most likeable character of the four and did well with it, even if a couple of times she didn't ring as true as she should: her confusion and conflicted emotions upon finding herself attracted to Elyot again lacked the honesty of Macfadyen's reactions, for one. Her Amanda is charming and sympathetic, but there's the nagging feeling she could have done so much more with the part. Predictably (at least for us, because we rate him so) Matthew Macfadyen delivered the best performance; more aware that he is actually in a tragedy within a comedy, his Elyot is appalling, short-tempered and sexist, but his claims at flippancy are only skin-deep. There was a moment when he declares "I'm depressed" to Amanda's husband and sits on stage like a beaten dog, and what at first drew laughs from the audience in a moment of true theatrical magic turned into a moment of genuine emotion, as Macfadyen allowed Elyot a bit of self-reflection and loneliness. And on top of all that, he is amazingly funny. His perfomance was unusual, his Elyot nervous and exquisitely camp at times - one almost wishes Macfadyen to reprise Colin Firth's role in Relative Values, also by Coward. Simon Paisley Day and Lisa Dillon are both excellent as Amanda's and Elyot's mismatched new partners and as clichéd as their roles might be they never forget to add that touch of subtle humanity to their characters. The four actors have perfect comic timing and the humour of the play relies so much on the physical, refreshing when considered how verbal Coward's wit is.

All in all, the play might not haunt our memory as a life-changing experience, but it sure was a good night out.


Other reviews:
The Guardian.
musicOMH.
There Ought To Be Clowns.
West End Whingers.
Telegraph.
Posted by exiledbyaccident at 04:40 No comments: 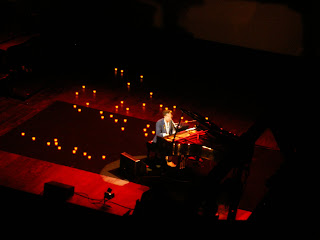 Cracking jokes about Wagner and Alistair Crowe and being appropriately arrogant and self-deprecating about his own debut as opera writer Rufus Wainwright presented his new upcoming record - All Days Are Night: Songs For Lulu - in London last night, in a concert as uncompromising and awe-inspiring as ever.

The new album is equally inspired by Shakespeare's sonnets and by Louise Brooks' rendition of Lulu, directed by Pabst. It is a musically-sparse, heartwrenching record, with Wainwright at the piano without any orchestra, unlike his previous, grand album Release The Stars. The new songs took up the first half of his performance at Sadler's Wells, sung in order and without breaks, in costume, surrounded by bits of the set for Prima Donna, all very theatrical. Of the dozen of times I have seen Wainwright in concert (yes, long-time fan here) I don't think I've ever heard his voice sound so well - sharp and healthy and powerful. He gets better and better each year. Despite his frequent false-starts and fuck-ups (more in the second half of the show) he is also a very compelling pianist. Even if the evening lacked his guitar-based classics ("California" or "Gay Messiah" I missed the most) it was a memorable chance to see a piano-only concert from Wainwright.

The new songs are spectacular and highlights included the rendering of Shakespeare's "A Woman's Face" and the ode of an old high school crush, "Zebulon". It's still too new an album to review it properly - by the time I see Wainwright at Oxford next month, or in the Kenwood House concert series in July, I will be more able to go past the "Oh My God! New Rufus Wainwright music!" stage that comes with each new released material. The new stuff is more direct but no less poetic; it shows Wainwright's determination of stepping out his comfort zone every time he seems successful with a formula. After flying as high as he could with the baroque and full of light Release The Stars it seems like Wainwright goes back to the basic, to see if his songs can work at their minimal expression. Only the true artist is so restless.

The second half of the show was more informal: Rufus Wainwright, out of coustume, and speaking to the audience, joking and moaning and laughing (& sharing one genuine moment of emotion as he talked about her late mother, the folk singer Kate McGarrigle). The playlist was compelling, oddly nostalgic in ways (he played "Millbrook", "Foolish Love") and even surprising. The real highlight of the night (apart from Wainwright covering one of his mother's songs) was "Dinner at Eight", chosen by the fans to be performed through the artist's official website.

Posted by exiledbyaccident at 08:23 No comments: